All women who are sexually active may fall pregnant, depending on factors such as age and frequency of sexual activity. Women who do not want to get pregnant can use contraception (also known as birth control) to prevent pregnancy. Although most contraception methods available are for women, there are options for men to help prevent pregnancies as well.

There are many different contraception methods, each varying in effectiveness, risks and other factors. It is crucial that you discuss with your partner when choosing the most suitable birth control method, as contraception is a combined effort.

Pregnancy occurs when a woman’s egg is fertilised by a man’s sperm during a woman’s ovulation period. Contraception, also known as birth control, is a method for both men and women to prevent pregnancy.

Contraception stops this process from happening by:

What Factors Should I Consider When Choosing a Contraceptive Method?

Some of the factors to consider when choosing a suitable contraceptive method include:

What Are the Types, Risks and Effectiveness of Contraception Methods?

Here are some of the most common birth control options:

Barrier contraception methods block sperm from travelling to the egg and are typically used before sexual intercourse.

Spermicides are chemical products that kill sperm, and they can come in many different forms, such as foams, gels, creams or tablets. They are usually applied to the vagina a few hours before intercourse and can be used in addition to other barrier contraception methods such as condoms, diaphragms or cervical caps. Spermicides may provide lubrication and can generally be used by women who breastfeed or smoke as well.

Effectiveness: About 70-80%. Spermicide is not very effective when used alone. Its effectiveness is significantly increased when used in conjunction with a condom, diaphragm or cervical cap.

Risks: No protection against sexually transmitted infections or diseases and may cause allergic reactions in some people. 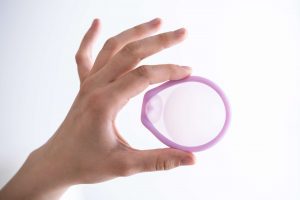 A diaphragm is a round piece of flexible, dome-shaped rubber cap fitted in the vagina against the cervix to prevent sperm from entering the uterus. A diaphragm is typically used with spermicides to increase its effectiveness, and it must still be left in the vagina about 6 to 8 hours after intercourse.

Effectiveness: Around 90-94%. A diaphragm used with spermicide may offer some protection against certain STIs.

Risks: Proper insertion is required, and it may dislodge during intercourse, reducing its effectiveness. Diaphragms may also cause allergic reactions in some people due to the use of spermicides.

A cervical cap is a thimble-shaped cup made of plastic or soft rubber inserted into the vagina and up to the cervix before sex. Cervical caps work by preventing sperm from entering the uterus and are usually coated with spermicide to increase its effectiveness. It functions similarly to a diaphragm.

Risks: Proper insertion is required, and it may dislodge during intercourse, reducing its effectiveness. Cervical caps may also cause allergic reactions, vaginal discharge and vaginal odour in some people.

A male condom is a thin, disposable covering typically made of latex or animal membrane worn over a man’s penis during sexual intercourse. Male condoms prevent semen (the fluid that contains sperm) from entering a woman’s vagina. Similarly, a female condom is a soft, disposable sheath with a flexible ring at each end that is placed in the vagina before sexual intercourse and blocks sperm from entering the womb.

Risks: Condoms may break or slip during sexual intercourse, significantly reducing their effectiveness.

Hormonal contraception methods change a woman’s body chemistry, such as stopping ovaries from releasing eggs, thickening the mucus around the cervix to keep sperm from travelling to the egg, or thinning the lining of the uterus. 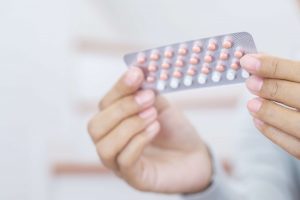 Effectiveness: Around 98-99% (only if taken daily at the correct timing)

Risks: Has to be taken daily and at the correct timing. Furthermore, it may create side effects such as nausea, breast tenderness, headache, high blood pressure, increased risks of blood clots and even heart attacks. These complications are higher if you are currently on other medications and if you are a smoker (above 35). Birth control pills also offer no protection against STIs.

A contraceptive injection is an injection of the progestin hormones in the buttocks or the arm every 3 months to prevent the release of eggs from the ovaries.

Risks: May result in side effects such as menstrual irregularities, bleeding, weight gain and depression. Contraceptive injections also do not protect against STIs.

A subdermal implant is a matchstick-sized rod inserted under the upper forearm’s skin. It releases the progesterone hormone to prevent ovulation, thickens up the mucous at the cervix and thins out the womb lining to prevent pregnancy.

Risks: May result in side effects such as bleeding, weight gain and breast and stomach pain. A subdermal implant also does not protect against STIs.

A contraceptive patch is a sticky skin patch the size of a large stamp that is worn on the lower abdomen, buttocks, or upper body. It releases the hormones, progestin and estrogen into the bloodstream and functions similarly to a subdermal implant in preventing pregnancy. These patches need to be changed weekly, for three weeks in a row.

Risks: Similar risks and side effects as subdermal implants. Additionally, it may cause skin irritation. 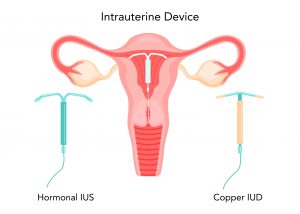 Intra-uterine devices are typically T-shaped tools the size of a 50-cent coin that is inserted into the womb. The two most common types of devices are copper IUDs and the hormonal intrauterine system (IUS). Copper IUDs do not contain hormones and they prevent the sperm from reaching the egg and also alters the womb lining so that fertilisation does not occur. Similarly, the IUS is also a T-shaped device inserted into the uterus to prevent pregnancy. However, it works differently as it slowly releases a small amount of the hormone progestogen into the womb instead.

Risks: May cause side effects such as irregular bleeding, infection, mood swings and headaches. Furthermore, IUD and IUS may fall out, which requires a trained professional to re-insert it.

Sterilisation is a permanent method of contraception that involves a minor surgery to prevent pregnancy. A female sterilisation surgery is called tubal ligation and it involves removing or closing the fallopian tubes so that sperm cannot meet the eggs for fertilisation to occur. On the other hand, a male sterilisation surgery is known as vasectomy and it involves cutting or blocking off the small tubes in your scrotum that carry sperm, so that the sperm does not leave the penis to fertilise the egg.

Risks: This procedure is irreversible and carries surgical risks such as infection or bleeding.

There are many different types of contraception methods to prevent pregnancy. It is recommended that you and your partner take into account various factors such as effectiveness, risks and lifestyle habits in order to make a more informed decision.

Furthermore, you may use a combination of contraceptive methods at a time to increase the overall effectiveness.

Schedule an appointment with our experienced team of obstetrics and gynaecology (O&G) specialists to review and decide the most suitable contraception method for you today.
https://www.sog.com.sg/our-clinics/gynaecology/