Singapore is a developed country with good infrastructure, socio-economic status and world class health care. One of the focal points of good healthcare is the maternal and child programme. Singapore has a Maternal Mortality Rate (MMR) of 3 per 100,000 live births and a Neonatal Mortality Rate (NMR) of 1 per 1000 live births, which ranks amongst the best in the world.

I have selected a few common complications that obstetricians experience and some of these complications appear without warning even in the best medical instillation. I often remarked nature can be harsh on the mother and baby. These complications are often unpredictable, unpreventable and often leave the labour ward team in a dilemma.

Term pregnancy refers to a pregnancy having reached 37 weeks to 40 weeks gestation, commonly denoted by Estimated Date of Delivery (EDD). Any labour pain in the third trimester between 28 weeks to 36 weeks is considered premature.

Most Obstetricians will take all measures to prolong pregnancy if premature labour occurs in the early 30 weeks. The aim will be to delay labour till 37 weeks if there are no other associated complications like high blood pressure or diabetes.

The dilemma occurs if the water bag has broken at the early 30 weeks where the fetus is below 1.5kg. There lies the painful decision of delivering the baby immediately to avoid a nasty infection which can lead to complications and death or delaying delivery until the fetal weight is heavier and his lungs are more mature, but at the risk of infection to mother and fetus.

At least once a week, I will have a pregnant mother asking if the umbilical cord of her baby is around her baby’s neck. The horrible image of the baby’s cord round the neck like a hangman’s loop has been plaguing the minds of pregnant mothers. The truth is cord found at birth around the baby’s neck is common and are usually loose with little or no consequence to the baby’s health.

What causes a labour room drama is when a patient has a broken water bag and a loop of cord is seen at the vagina. Immediate action has to be taken to deliver the baby because the body of the baby (usually the head) can compress on the cord and cut off the blood supply to the fetus, leading to immediate fetal death.

Once a diagnosis is made, code blue for labour room and operation theatre emergency is activated and the patient is rushed to surgery in knee chest position, with a doctor or nurse’s hand in the vagina preventing compression of fetal body on his own cord. Bystanders will find it amusing with a patient wheeled in bed with buttocks up and a medical worker’s hand in the rear, followed by a train of medical team urging people to make way.

There lies the reason of why patients with leaking water bag should go to the labour room as soon as possible to be examined and not make detours to the hairdresser’s or have a full meal in case of not given food in the hospital. It is always safer to have an empty stomach before surgery to prevent reflux of stomach acid and contents into the lungs.

Have you ever wondered why blood pressure is taken at every antenatal visit especially when mothers are young as compared to older adults at GPs. The reason is blood pressure in pregnancy can suddenly shoot up towards the third trimester of pregnancy. The condition is called Pre-Eclampsia Toxaemia (PET). This hypertensive condition if untreated can lead to severe headache, giddiness, blindness, epigastric pain, fits and coma of the mother. It is the “fitting” episode that in the past, the local chinese called it, ‘cry of goat’. The baby will usually die in the mother’s womb. With modern antenatal care and better maternal nutrition, this is not often seen but occasionally intrauterine death has occurred in unrecognised or uncontrolled hypertension.

Once severe rise in blood pressure is diagnosed, the patient is immediately admitted to a hospital ward with dimmer lights and quiet rooms so as not to ‘excite’ the blood pressure. Even the bed pan is brought to her to minimise movement. All these are prescribed to de-stress the patient apart from drugs.

The aim is to bring the blood pressure down as low as possible to deliver the baby at the optimal moment for survival.

Nobody likes to be in the ‘red’ whether it is the bank account or the wrong shirt colour in Thailand. Similarly in obstetrics, doctors do not enjoy seeing abnormal vaginal bleeding in the antenatal period.

One of the most common complication where painless vaginal bleeding occurs is a low lying placenta known as Placenta Praevia. This is due to the unfortunate placement of the placenta at the lower part of the uterus near the opening of the womb called the cervix or a placenta covering the cervix. It may be detectable antenatally on ultrasound scan but, it is unpredictable when it will bleed. It is also unpredictable how long it will bleed and how often bleeding recurs. Hence, this condition is highly stressful to both patient, family and the doctor because of its unpredictable bleeding episodes. It is like carrying a time-bomb.

The outcome fortunately is favourable if bleeding can be arrested or the fetus is matured enough to be delivered by Caesarean section in all well-equipped obstetric units. Profuse vaginal bleeding can lead to demise of the fetus when bleeding occurs in its very premature stage. The mother may suffer from the complications of severe blood loss, leading to maternal death.

When a patient is admitted, resuscitation to normalise her vital signs and arresting bleeding is the top priority. Nerve wrecking decisions have to be taken depending on the severity of the situation. Sometimes, sacrifices may have to be made in order to save the adult.

A pregnancy presenting by the breech may arrive at the doorstep before term, sending the team scurrying to shout for intensive neonatal and operation room team to be on high alert.

Another scenario may be assisted vaginal delivery with forceps or vacuum but the baby failed to descent due to poor maternal effort or failure of rotation of the head or the fetus is just marginally bigger than the vaginal passage at a certain point. Hence, the mother may have to have the vaginal cut (episiotomy) stitched quickly and rushed to operation room for an emergency caesarean birth.

These are a few, fortunately rare complications that are Obstetricians’ nightmare. Notable amongst them are Postpartum Haemorrhage needing removal of the womb and an often deadly condition called Amniotic Fluid Embolism which occurs out of the blue.

My Advice To All Pregnant Mothers Are:

We all hope and pray for smooth deliveries in all mothers and wish for healthy newborn babies. But certain incidences happen out of the blue and unexpectedly. If and when they happen, we have to make sure we are all prepared for it. 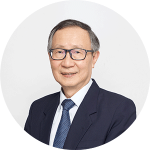 “Dr. Lee is highly skilled in laparoscopy and hysteroscopy. He was awarded the Benjamin Henry Sheares gold medal in 2003. Chongqing Medical University conferred the Adjunct Professorship upon him for his work in High Intensity Focused Ultrasound (HIFU)."