Coughing in Children: Everything You Need To Know

A cough is a swift expulsion of air from your lungs. It is a natural reflex to clear your throat and breathing airways of foreign and contaminated particles such as microbes, irritants, fluids, and mucus.

There are three stages that can be observed in coughing:

For some, coughing may not be severe and does not require medical attention as it can resolve on its own. However, there are other cases where coughing is a symptom of an illness such as an infectious disease. The following section will share the types of coughs in children and their causes.

Types Of Coughs In Children And Their Causes

In general, coughs result from various respiratory conditions such as influenza or asthma, or even illnesses such as pneumonia. To determine the severity of the cough and if you need to bring your child to see a paediatrician, read on to learn how to identify the different types of coughs and its causes.

What is it: It is bedtime, and your child gets to bed with a stuffy and blocked nose. All is well until you start hearing your child coughing and sounding like a barking seal.

The cause: The barking seal sounds are due to an illness known as Croup that is caused by inflammation in the larynx (voice box) and trachea (windpipe) of the respiratory system. This condition is common among children between 6 months to 3 years old. Things may seem fine during the day, but when night falls, your child’s condition may suddenly take a 360-degree turn and he or she may start coughing non-stop. There may be occasional high-pitched whistling sounds when your child is asleep as well.

What is it: Your child appears to have symptoms such as loss of appetite, runny nose and sore throat that causes his eyes to become teary, with very phlegmy coughs.

The cause: A common cold. It is common for babies and children to catch colds. The phlegmy coughs are due to the mucus membrane producing excess amounts of mucus to protect your lungs from foreign bacteria and keeping the airways moist. Colds are infectious during the first few days but will subside after one to two weeks.

What is it: Your child is too weak to move around and is unable to carry on with daily routines. Besides having hoarse, weak coughs, he or she has a high fever, flu, and muscle aches.

The cause: Unfortunately, your child may have caught the flu (Influenza). It is a viral illness that strikes the respiratory system, and the body reacts by coughing as a defense system. It is important to note that the flu is contagious as it has a long incubation period in children, so your child can move around with the virus before falling ill. During the incubation period, friends and family members may be at risk as the flu is transmitted to others by tiny droplets of the virus from sneezes or coughs.

What is it: Your child is breathing rapidly and becomes easily irritable. The cold has lasted a few days with no signs of recovery. He or she is wheezing and coughs with a whistling sound at the end.

The cause: Bronchiolitis is the most likely culprit for your child’s symptoms. It is an infection of the bronchioles, the tiniest airways in the lungs. The bronchioles swell, and as it fills up with mucus, it becomes a challenge for your child to breathe.

What is it: Your child appears to have a very wet and phlegmy cough, with quicker breathing rates that last for more than a week.

The cause: Pneumonia is a viral infection that inflames the lungs, filling it up with fluids. Once the lungs are full of fluids, it makes it harder for your child to breathe normally and in attempting to displace the fluids; he produces a wet cough.

What is it: It occurs when your child wheezes, seems to have chest tightness and starts to breathe rapidly. It can happen at any time of the day.

The cause: Chest tightness and rapid breathing are caused by swelling of the airways, resulting in muscles tightening which then blocks the airway. Your child will have difficulty breathing normally. Also, it is common for asthmatic children to have an attack during exercise.

When to See a Doctor

Should your child’s cough persist over a week and start to affect his sleep and daily life, you will need to visit your child’s paediatrician to seek medical treatment. In addition, if your child has sudden difficulty in breathing, exhibits unusual respiratory symptoms or appears to have inhaled something foreign, do not hesitate to visit the doctor immediately.

An Important Note About Home Treatments

Bringing your child out for fresh air to relax the airways or taking a warm, steamy shower are some ways to alleviate discomfort with croup. Having a humidifier near the child’s bed can help to moisten the air and lubricate nasal passages. For infants with a blocked nose, using saline or saltwater drops/spray can moisturize the nasal passage as well as physically flush out the secretions.

Of note, it is not advisable to give cough suppressants to children under two years old due to side effects of sedation, irritability and behavioural change.

There are many different types of coughs caused by various factors, including the weather. Always set a good example for your child by adopting good hygiene habits such as washing your hands and avoiding touching your mouth or eyes, if possible. To keep illnesses and child coughs at bay, always aim to keep your child hydrated and well rested. Ensure they maintain a healthy diet and healthy lifestyle with regular exercise as doing so will help strengthen your child’s immune system. 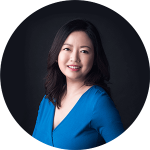