Endometriosis is a condition when the tissue that lines the inside of the womb starts growing outside of it. This tissue can implant itself in any part of the body – the most bizarre cases involving areas far from the womb, for example, the lungs (catamenial pneumothorax – bleeding into the lungs during menses causing respiratory problems) or eyes (patients can bleed from tear ducts during menses). 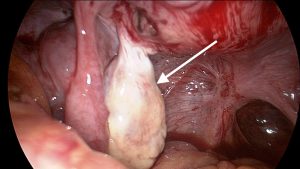 Endometriosis reacts to the female hormones – typically flaring just before and during the menstrual period. Sufferers can report pain in the afflicted area, excessive and prolonged menstrual periods, painful intercourse and difficulty in getting pregnant.

Some patients may have this condition and yet experience no typical symptoms. For such patients, it will be a challenge to clinch the diagnosis. The celebrity chef Padma Lakshmi experienced symptoms for 23 years before being diagnosed with endometriosis in 2006. She is now an advocate for women with the condition.

Hopefully, this article can improve your understanding of this condition which affects 1 in 10 of the women of reproductive age.

Endometriosis is a chronic, incurable gynaecological disorder which can debilitate sufferers. The uterine lining finds a life of its own outside of the womb –  behaving as if they were inside – they grow based on the hormonal changes of the menstrual cycle, and the blood irritates the tissue where they implant. This growing and shedding ectopic tissue can cause stickiness and scarring of the areas where they are at – patients have presented with problems of intestines being stuck together in emergencies.

Endometriosis can cause subfertility due to three main reasons:

1) It distorts and causes the fallopian tubes to be blocked

2) Endometriotic cysts (Blood cysts) – the most common manifestation of endometriosis. The need for surgery with the cysts can reduce ovarian reserve. 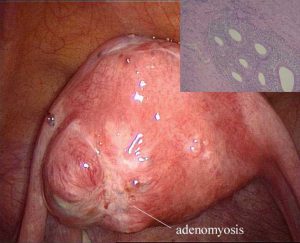 When patients get diagnosed with endometriosis – the first question we get asked as gynaecologists is “ Why me?”

There are a few theories as to why this happens.

This is the most popular theory. There are bad cases of endometriosis in patients born with a “blocked vagina” – whereby all the menstrual blood moves up through the tubes into the body. Hence, supporting this theory.

This suggests that the cells of your abdomen and pelvic area transform themselves into endometrial cells (the ones typical of the uterus). This is possible because these cells in your abdominal and pelvic cavity stem from embryonic cells which have the potential to transform and develop into any type of cells when it comes to cell differentiation.

Some see the cause of endometriosis in hormones which are believed to influence the cells outside the uterus to behave like the ones inside of it i.e. endometrial cells.

This suggests that the endometrial cells follow the bloodstream or lymphatic flow to distant areas eg the lungs, brain, eyes.

Surgeons have seen endometriosis developing in surgical cuts – for example, the umbilicus (“belly button”) after keyhole surgery for endometriosis treatment or in the scar following a C- section. Hence supporting the theory that some patients will have a uterine lining that can implant in different places if introduced there.

Some families have a few females having this condition. Hence supporting the theory of genetic predisposition to endometriosis.

It is difficult to tell which individual has or will have endometriosis. If you are of reproductive age or experience any problems with your periods, it is advisable to consult your gynaecologist so that the diagnosis can be correctly made.

What are the Symptoms?

Symptoms vary extensively among women. They are also not indicative of the severity of the condition. For example, a woman can have rather mild symptoms but have an advanced stage of endometriosis.

Pain is the most common symptom. It is usually in the form of menstrual or premenstrual pain (known as dysmenorrhea) or pain during deep penetrative sex ( deep dyspareunia). Some patients with involvement of the pouch of douglas ( space between the back of the uterus and rectum) can experience pain during defecation around the time of menstruation. If the endometriosis causes “stickiness” to the area next to the womb, the symptoms can also be leg or back pain. The main feature of pain in relation to endometriosis is the cyclical pattern.

Prolonged bleeding can occur especially if there is adenomyosis – endometriosis penetrating into the muscle of the uterus. The uterus soaks up the blood discharge from the lining and can bleed even after the actual period is finished.

We usually consider a change of pads or tampons every 2 hours, flooding or passage of big clots during menses as excessive.

The endometriosis implants to the large intestine behind the uterus or the bladder in front of the uterus can lead to pain and discomfort during defecation and passing urine. Some patients may even report passages of blood through stools or urine if their condition is severe.

With regular unprotected sex, most patients should conceive within 1 year. Endometriosis may be seen in 40% of women who have difficulty conceiving.

Do read our next article on the diagnostic considerations of endometriosis. There are many other conditions that can have symptoms listed above. Please do not self diagnose. Seek professional opinion from a gynaecologist if you identify with any of the points above.